There is still much to see in the Gardens in winter.  As well as admiring those rugged plants which regularly appear at this time of year, it is also a great time to notice things which are easily overlooked when there is more going on.  The bark of trees, for example, can be clearly seen without the surrounding distractions of foliage, flowers and fruit, and there are some very interesting examples at Holehird.

Among the many examples of interesting barks, a few are particularly worthy of note: the paper bark maple, Acer griseum, close to the stone bridge across the Cascade; the dark and deeply furrowed bark of the walnut tree, Juglans regia, on the left of the Upper Drive; the knitted appearance of the bark of the tulip tree, Liriodendron tulipifera, on the opposite side. 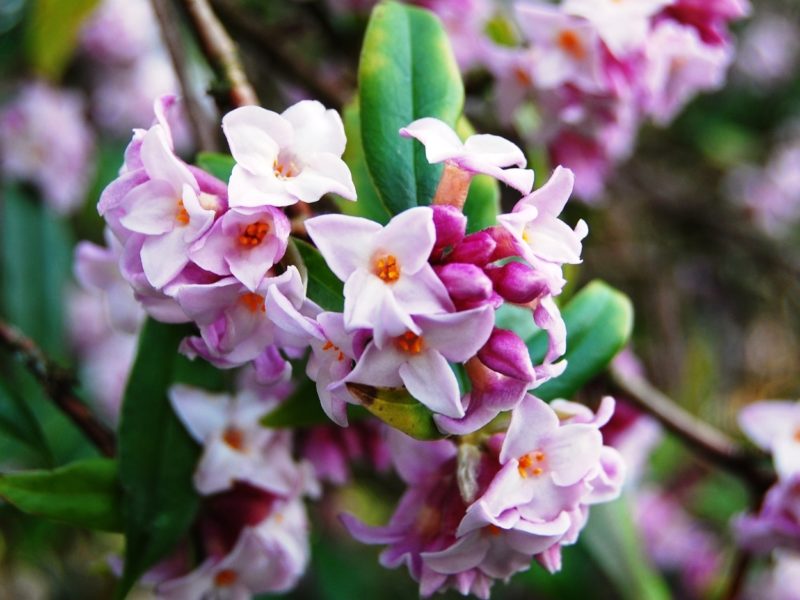 One plant worthy of special mention in winter is Daphne bohlua 'Jacqueline Postil'.  Planted next to the Nicholson Gates, giving access to the Walled Garden from the Courtyard, its stunning sweet scent is evident to all who approach it.

The Winter Border contains many interesting varieties of hamamelis (witch hazel), hellebores and pulmonaria, alongside cyclamen and early flowering bulbs, including snowdrops.  Of all the seasons it is most difficult to predict when flowers will appear in winter so different combinations of these plants are likely to be evident at any one time.

The Winter Heather Border is a reliable feature, with interest provided by the massed planting of the bed taken altogether, as well as the variety of shapes and colours in the individual plants.  Visitors may be surprised to see early flowering rhododendrons, such as R. 'Christmas Cheer', from as early as January and, in late winter, R. praecox.

As winter progresses, the early-flowering bulbs appear.  These include aconites, crocus, leucojum and cyclamen.  Often found growing under trees such as the giant sessile oak near the Fellside Path, you need to look closely to see them.  Much more evident, are the increasing numbers and varieties of snowdrops which have been planted and are beginning to form large clumps around the Gardens.  A large drift of snowdrops in the Woodland Walk greets visitors as they approach the Car Park along the drive.